Back to all posts

Why I hate the word “talented” and I’m not alone

I was a sophomore in college when my saxophone professor told me, “Your natural talent has run out. Time to get to work.” Then he threw me out of my private lesson. He told me that he wouldn’t admit to anyone that I was his student until I committed to working more.

I’d like to tell you that was a major turning point for me, but unfortunately it wasn’t. Although I knew I needed to “get to work,” I really didn’t have any idea how to do that. Music had come pretty easy to me up until that point and the only hard work I had done was for auditions.

I had no idea how to maintain hard work on a regular basis. I stepped it up enough for my professor to admit I was his student again and made it through a couple more semesters of college, but I soon dropped out, walking away from a full-ride academic scholarship. It took a while, but I eventually learned the intrinsic details of what “getting to work” really meant, and how you can accomplish the goals that you set out for yourself (while simultaneously setting new goals.)

The word “talented” is thrown around a lot. It’s a catch-all explanation used to explain why someone can do something well - whether it be music, sports, acting, writing, etc. But that word has always rubbed me the wrong way.

What bothers me is that the word “Talented”
implies a lack of effort, a gift that was
given - that some people got but others didn’t.

What the word fails to capture is the ambition, sacrifices, drive and hard work that goes into achieving that “talented” label. I can guarantee you that there isn’t a professional musician, actor, teacher, artist, athlete, etc that hasn’t worked hard at their craft, no matter how much or how little talent that may have started out with.

Unfortunately, as fans or observers, we rarely get the opportunity to see the behind scenes work, only the final product. That’s where “You’re so talented” can be detrimental to a person’s growth.

When people hear me play, I inevitably get the compliment “You’re so talented” often followed by “I could never do that.” I know they mean well and that in their minds, talented is the right word. I smile and say Thank You, but inside I cringe. Because I work really hard to do this and using the word talented makes it sounds like I didn’t. Some people assume that I woke up one day, picked up a saxophone, and could play at this level. And that they can’t. That’s just not the case.

Which of these thoughts can you relate to?

Years ago, I saw this Instagram post by Edutopia - that offered alternatives to the saying “You’re so smart” to children. As soon as I saw it, I knew that it would be beneficial to create alternative to “You’re so talented” for parents, teachers, and fans to use when they talk to musicians and music students of all ages. 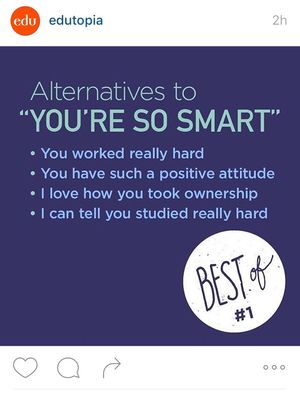 So what are some sayings we can use instead of “You’re so talented”:

The majority of people who got where they are did so because of interest, plus a LOT of hard work, and maybe even some luck. Just like in sports, getting into the NFL doesn’t mean someone has made it, and that they can stop attending practice. It simply means they have just begun that journey.

Because the dark side of talent is using it as an excuse for not succeeding, when all that is required for success is hard work. Talent doesn’t require courage, but work does. Dedicating hours to practice, or being brave enough to improvise with others even when you are just beginning, pushing through a difficult phrase or trying to master a technique. All of those have nothing to do with talent. And coincidentally, they all have everything to do with dedication and perseverance.

And this affects not only professional musicians, but those starting out. Do you want to learn a new instrument but feel that you are not “talented” enough? Once you replace an intangible concept of talent with something that you can control: “work”, you will see an entire world open up to you. A world of really cool experiences that you would have missed out on, thinking you didn’t have the “talent” for it.

So I encourage you to ask yourself: what compliment would you give instead of “you’re so talented?”